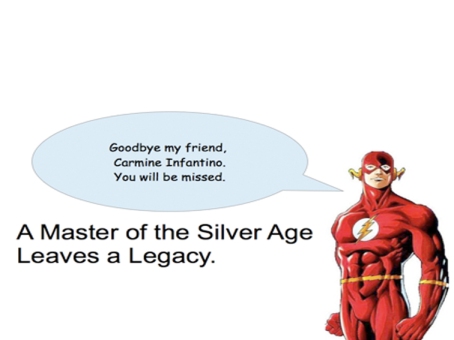 I started out reading DC comics. They were action packed and no matter who the hero or heroine was, there was a moral to the story. In place of any sort of guidance from my elders on moral turpitude, the stories served as a paradigm by which to live my life. I was the underdog in my own life story and someday, I would rise to the yet unknown heights I deserved. After a pernicious phase of Archie and romance comics, I lost interest in the medium, only to rediscover its epic meaning during my twenties. I thank my luck stars that I dated comic book collectors.

To a certain extent, one of the comic book industry’s great contributors, Carmine Infantino’s rise to fame is one that mirrors that of his beloved characters – a saga of rags to riches through innovation and hard work, but tinged with a bit of mercurial magic. He came up during the depression and was a protege to men like Jack Kirby and Will Eisner during the Golden Age of comics. When we get to the nineteen fifties, Infantino was coming into his own. He took the atomic age by storm. He reinvented Bob Kane’s Batman from a detective with gadgets into a full blown super hero. He did the same for The Flash – removing the trappings of World War II – losing the helmet and the lingo – and added the sleek red costume we know today.

During the Silver Age of comics, Infantino went where he was needed, helping Timely Comics become the power house it is today more associated with his compatriot Stan Lee – Marvel Comics. During the seventies and eighties he was at the head of all the untold Star Wars tales and associated with more than just the print medium. His contribution reads almost like a roster of who’s who in comic book characters including: Spider-Woman, Nova, Ms. Marvel, and Howard the Duck, Adam Strange, Batman and The Flash.

His contribution is epic, to say the least.

Carmine Infantino passed away on April 4th, 2013 in a borough of New York, or perhaps I should say Gotham. He was a dynamic man of the Silver Age of comics and his influence will be felt for years to come by all of us, but especially by the nerds at cosplay in big convention halls during Comicon, and by hipsters and geeks in search of the perfect vintage lunch box for their bento boxes, and anyone seeking a moral code to live by.