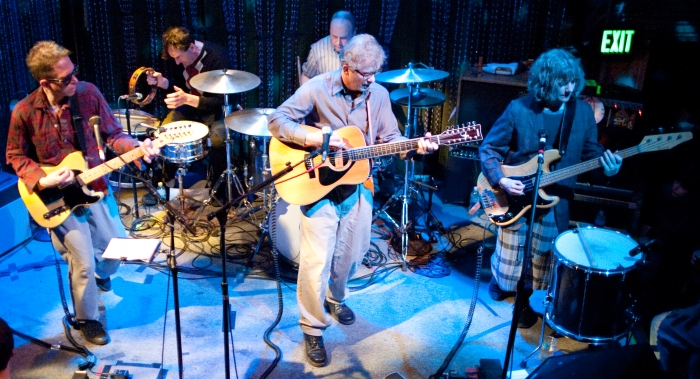 Last spring, around the time of the Boston Marathon manhunt for the mad bombers, the Feelies were scheduled to perform at the Paradise. The show was canceled, but the Sinclair and the Feelies, honored those tickets. The Sinclair, as it turned out, may have been a better venue for the Feelies. I’m not dissin’ the ‘dice here, it’s just that the sound levels for the room were so perfectly set. No earplugs required, something I usually need.

The room was overflowing with a polite standing room only crowd. You could actually hold a conversation, but hardly anyone did once the Feelies took the stage. They started at nine, promptly, with no opener. The crowd didn’t dance for the most part, but grooved out nonetheless, because the Feelies were phenomenal with their signature jangly pop rock sound. There was little banter and no hesitation between songs. They started out steady with old favorites like “Original Love,” and “Crazy Rhythms,” interspersed with covers, like “Who Loves The Sun,” by the Velvet Underground, and the Beatles’ “Ticket to Ride.” They also hit their more recent material like “Nobody Knows,” and “Away,” their 1988 charting hit, adding in a fantastic rendition of “Dancing Barefoot,” the Patti Smith ballad.

Everything about this concert was well executed, down to the staging, lighting, and if you will, costuming. Whether they have someone color coordinating their plaid shirts, Glenn Mercer (vocals/lead guitar) in red with his green sunglasses, Bill Million (rhythm guitar, backing vocals) in grey-green, and Brenda Sauter (bass, backing vocals) in pink against her fab powder blue bass, or they’re just really, really in tune, sorry bad pun there, the Feelies rocked with precision, grace and a little reverb. Fantabulous. Stan Demeski (drums) and Dave Weckerman (percussion) were fucking machines, and Sauter helped out on percussion on a number or two, as well.

No moody lighting, or lasers in you face – the lighting was clear white and I could see standing in the back by the board, no problem. During the second set, with the lighting, they mixed it up a little – some red and blue washes, and turned up the volume a smidge as Mercer ran amok with some blazing guitar solos with more great songs like Velvet’s “There She Goes,” and originals like “Higher Ground.”

Maybe with the closing of Maxwell’s they’ve taken back their Jersey roots in a new way because they did an incredible version of the Stooges “I Wanna Be Your Dog,” wait, the Stooges are from Detroit, oh well – anyway – many a veteran Feelies fan I spoke to had never heard them play that, and they did a great growling version.

End of the evening after almost three hours we got four, count ’em, four encores. Covers included and are not limited to the Stones’ “Paint it Black,” and a bass and percussion heavy “Get Off Of My Cloud,” followed by their volatile version of REM’s “Shaking Through,” with their final selection from Crazy Rhythms “Fa Cé La.”

If I had any criticism at all it would be “more cow bell,” oh wait, I mean wooden block. Kidding. Go see them, and get their new record “Here Before” (Bar/None CD 2011) and Feelie good about helping out an incredible progenitor of the indie rock movement. Re-release’s of “Crazy Rhythms,”(1980), and “The Good Earth,” (1986), the first two LPs by the Feelies are also available this month from Bar/None.